Pontypridd RFC’s Sardis Road stadium – ‘Dan’s Muckhole’ as it is known in local parlance – stands on the site of a former colliery.

The club’s history itself is inevitably intertwined with that of the mining industry which was crucial to the development of the town. When ‘black gold’ was found to be lying in rich abundance under the Glamorgan Valleys, its excavation commenced on an industrial scale in the middle of the nineteenth century.

The local population exploded with an influx of people searching for employment in the mines, who in turn became hardened rugby players as the new sport took hold in the area at the same time. A successful team was set up in the Maritime Colliery which played fixtures against the top clubs, and it was the amalgamation of this ‘works team’ with the town team in 1892 that gave impetus to the future achievements of Pontypridd RFC.

The pits around Pontypridd were numerous and productive. The Maritime Colliery was the first to be sunk in 1841, followed by the Newbridge Colliery in 1844, Ty Mawr Colliery in 1848, and the Great Western Colliery in 1851. A second wave of pits came with the expansion of the Rhondda coal seams, one of which was the Pwllgwaun Colliery – Dan’s Muckhole’ – which was established in 1875, coinciding directly with the formation of Pontypridd RFC.

The original proprietor of the new pit was a formidable character named Daniel Thomas, a bare fist mountain fighter who later reformed his ways to become a respected religious philanthropist. When he passed away in 1910 the ownership passed to his son-in-law Henry Mogford. The Pwllgwaun Colliery was taken over by the newly nationalised NCB after the Second World War but was no longer productive and was closed in 1948.

As its nickname suggested, Dan’s Muckhole was a difficult pit to work – wet, dirty and dangerous. Access was by a walk knee-deep in water, with the underground workings extending over a mile and a half into the Rhondda no2 coal seam, the shafts in places as low as 2ft6in with the miners lying on their sides to hack away at the face. The coal was brought up to the surface to be transported on the Rhondda to Barry railway line which ran directly behind the pit. 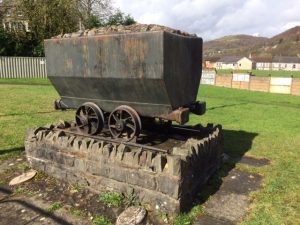 Pontypridd RFC’s new stadium on the site of the Pwllgwaun Colliery was developed in 1974. A coal dram was placed at the Rhondda end of the ground in tribute to those who had previously toiled underground and an original mine level can still be seen behind the Grandstand as a low archway covered by an iron grid.

The local reference to ‘Dan’s Muckhole’ persisted, and indeed took on a new meaning as the Ponty ground earned a reputation as a mudbath in wet weather. Legends of a collapsed scrum disappearing into the red mire in front of the stand are apparently untrue.

Sardis Road today is a first-class Premiership stadium, a community asset with a state of the art artificial 3G pitch installed. Its history however remains proudly linked to the town’s industrial past. Who knows, that on a dark winter’s eve as the mist rolls down the valley, the spirits of the colliers, the lost souls of Dan’s Muckhole, still walk the place.