Pontypridd travel to play Bridgend Ravens on Saturday 26th October, the Premiership tie at the Brewery Field kicking off at 2:30pm. 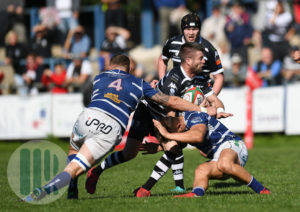 The two teams come into the match with contrasting fortunes, Ponty off the back of a 32pts to 25 bonus point home win against Ebbw Vale, Bridgend after a heavy 40pts to 13 defeat at Llandovery. The Valley Commandos are however seeking their first away win of the new season in all competitions.

The league rankings show that both Ponty and Bridgend have endured indifferent starts to the campaign, Ponty sixth placed with two wins out of four and Bridgend down in eleventh position with one win from three.

Centre Dafydd Carter is called up for his first senior start of the season for Ponty, with a familiar face on the bench, prop Joe Popple having returned on a break from his venture to New Zealand, and covering for Ross Davies who is out with a rib injury.