Pontypridd scrum half Wayne Evans has decided to hang up his boots for good at the end of the current season, bringing to a close an illustrious playing career. 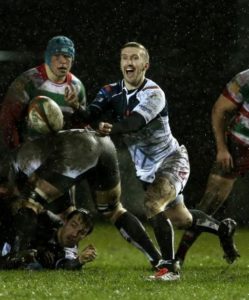 The decision to retire was made out of necessity rather than choice for Evans following a fractured leg which he incurred in the away game against Merthyr in February. Complications to the injury have made it impossible to play on.

A product of the Carmarthen Quins club Evans was capped by Wales at Youth and under 21 level, a member of the Scarlets Academy before he moved to the Blues in 2005. It was from the capital region that Evans linked up with Pontypridd.

Announcing his retirement, Wayne Evans was keen to emphasise the importance of his time with Pontypridd in the context of his overall playing career.

“I’ve had some good times with Ponty” said Evans “and it was always my wish to return to the club to finish off my time as a player, which I achieved.

“It was disappointing to have to give up playing due to injury but with so many plates and pins inserted beneath my knee, in reality there was no choice.

“I will now take time to focus on my work before considering any options but I would in time like to stay involved with the game in some capacity.”

All at Pontypridd will wish to thank Wayne Evans for his prominent contribution to the club in his two spells as a player, and to wish him all the very best for the future.