We have come to the end of a strange and difficult season, with a lot of new players in the side and a few elder statesmen still battling on. We got to the quarter-final of the cup competition and won seven out of our eleven league games, which was a reasonable performance all round. Our forwards went well throughout, with our young front row often demolishing the opposition. The serious injury to Ben Burnell in November was a sad blow, as he was showing great promise as an attacking No. 10.

I have attached my usual summary of the season’s statistics, beginning with the results and league table. Our seven wins in the league was the second highest, equal with Aberavon and with only Newport and the winners Cardiff getting more victories, but our lack of bonus points meant that we could only finish in seventh place. One more bonus point would have put us in fourth place.

We used 48 players during the season, with Tom Harper, Cally James, Kristian Parker, Ben Stephens and Dale Stuckey appearing in all 22 games. Dale was the highest try scorer by a mile and was also an excellent reserve goal kicker. He was outstanding in attack and defence throughout the season. The second highest try scorer was the penalty try count of five, followed by hooker Ieuan Morris’ four tries. Like all good front row forwards, Ieuan will tell you that he ran in from at least fifty yards for all of his tries!

Young Chris Dicomidis ended the season on 377 games for the club, second only to Dafydd Lockyer in the current era, and were it not for his period with the Blues squad and the loss of a season to the epidemic, Chris would now be well over the 400 mark. His commitment and enthusiasm throughout the season have been tremendous and we must hope that he has enough gas in the tank for a couple more seasons. Dale Stuckey and Joel Raikes have now passed the 150 mark, and Dale’s points total of 476 is the third highest in the current era, behind Dai Flanagan and Simon Humberstone. Not bad eh?

A number of key players from the pre-epidemic era left us before the start of last season, with skipper Daf Lockyer the biggest loss. His power in midfield meant that the opposition had to put two men on him, and this always created gaps for those around him. The retirement of Rhys Shellard at the end of the season was also a great loss to the club. A great player and a great servant to Ponty RFC. We shall miss him.

Summing up the season, we have the makings of a very good pack of forwards, a resurrected Youth XV to build for the future, and the best supporters in the club game in Wales. Also, the display by the mini and junior section a few weeks ago was superb. The future is bright. The future is black and white. See you all next season.

Alun has put together six pages of statistics that can be viewed below:- 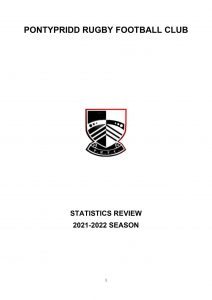 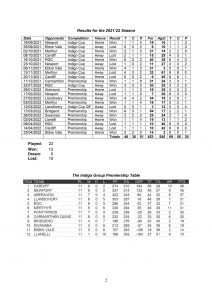 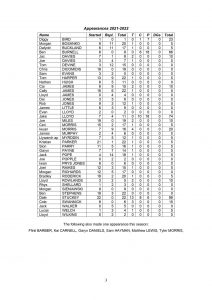 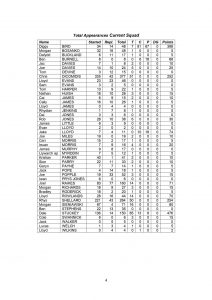 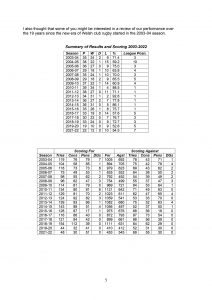 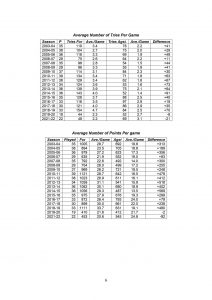