The University of South Wales progressed to the quarter final stage of the BUCS Vase competition following an emphatic victory over Loughborough University 2nds at Sardis Road on Wednesday evening 28th February. 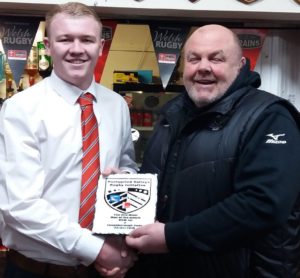 Despite the match being played in blizzard conditions on the 3G surface at Sardis, USW put in a dynamic performance, running in eight tries in achieving a 51pts to 32 win. Nominated as City West man of the match was second row Lloyd Evans – pictured receiving his award from coach Justin Burnell.

USW now progress to the Vase quarter final round, where they will face the winners of the outstanding Leeds v Bath 2nds last sixteen qualifier.

The full draw for the BUCS Vase quarter final round, scheduled to be played on the 7th of March, is as follows: