University of South Wales have been given a bye into the semi final round of the BUCS Vase following the postponement of their quarter final tie against Leeds University. They now progress to face a tough away tie against Durham University on Wednesday 14th March. 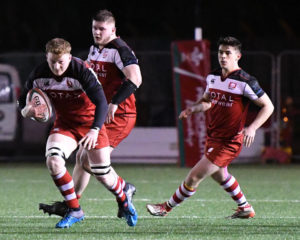 Having finished a creditable third in the BUCS South A League, USW are now battling for glory in the Vase competition.

The ultimate aim is to gain promotion to the BUCS Super League, but that future challenge will be made on the firm foundations laid this season, according to assistant coach Justin Burnell.

“We have been finding our feet this season” said Burnell, “with the new Pontypridd & Valleys Initiative in its inaugural year. It has already proved to be a great success and gives us real hope looking to the future.

“The partnership forged between USW and Pontypridd RFC is a strong one, with players appearing for both sides, shared match analysis and facilities, and with the University head coach Ben Daniels stepping in to work with the club in the recent absence of Gareth Wyatt. The integration is working really well and providing success on the field of play.”

The BUCS Vase semi final showdown with Durham University on 14th March will keep the season’s momentum going for USW, with Hartpury 2nds facing Nottingham in the other tie.