University of South Wales continued their recent fine run of form with an impressive 30pts to 10 home win over Hartpury College 2nds on Wednesday 22nd November. 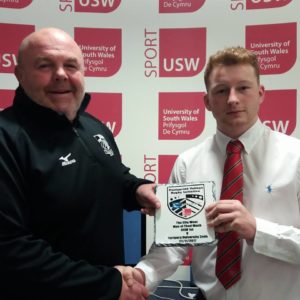 The match was played in difficult conditions at the USW Sports Park in Nantgarw, but the hosts crossing for five tries to claim a win that elevates them to third place in the BUCS South A table, leapfrogging their opponents Hartpury. Try scorers for USW were Marcus Jones (2), Joe Popple, Curtis Ayling and Josh Hayward, with Foard Cooksley adding a conversion and penalty. Flanker Sion Edwards was nominated as City West Commercials Man of the Match (pictured above).

The win posted over Hartpury was the fourth in succession for USW who are keeping in touch at the top of the BUCS South A table, with hopes of promotion to the Universities Super League still alive.

Celebrating his side’s latest success, coach Justin Burnell said: “The win over Hartpury was a big statement from us, a good result achieved in difficult conditions. We are making massive strides both on and off the field, and although with much work still to be done, we aim to be in the mix towards the end of the campaign.

“The partnership between USW and Pontypridd RFC is a positive one, with players such as scrum half Jamie Hill, prop Joe Popple and flanker Sion Edwards training with both squads, which benefits both parties.”

USW will travel to play Swansea University away in their next BUCS fixture on Wednesday 29th November.