The GTFM Ponty Rugby Show will be broadcast at 6:45pm on Wednesday evening 23rd November and joining Adam Cleary as the special guest this week is former Ponty and Wales star Ceri Sweeney.

Ceri made 173 appearances and scored nearly 1,000 points for Pontypridd during two spells with the club at either end of his playing career. He also played for the Celtic Warriors and after their demise, the Newport-Gwent Dragons, Cardiff Blues and Exeter as well as winning 35 international caps for Wales. He’ll be chatting to Adam about his time at Sardis Road as well as his rugby career as a whole.

Guto Davies will be presenting the regular Newsround section which will include a round-up of all the current goings-on in and around Sardis Road.

GTFM has expanded its FM coverage and can now reach the whole of the Cynon Valley – on 107.1FM for the Aberdare area and 100.7 for Mountain Ash. Broadcasts for Pontypridd and the rest of RCT continue on 107.9FM. The channel can also be accessed on-line and by app. 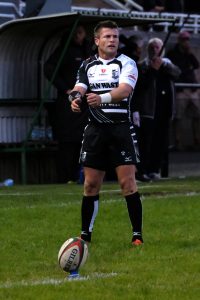