After nearly two decades, either side of a short stint away, flanker Rhys Shellard has departed Pontypridd RFC as a true great.

Following in the footsteps of his father Mike Shellard – who was also a legendary Ponty backrower – the young Rhys Shellard progressed through the junior and youth ranks with his local club, Aberdare.

Playing on permit for the Abercynon senior team in division two of the Welsh leagues, whilst still only eighteen years of age, Rhys continued to impress featuring for Wales at under 19 FIRA level in the 2004 Six Nations and World Cup tournaments.

Whilst studying sports science at Neath College, Rhys made a number of appearances on dual registration for Pontypridd in the Premiership, filling the blindside and openside flanker berths with the same industrious commitment before signing up on a permanent basis for the Sardis Road team at the commencement of the 2004/2005 campaign. 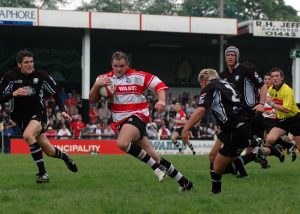 Making a huge impact at premiership level during the 2004/2005 season, Rhys became a core member of the Wales under 21 squad and was awarded professional regional status by the Blues Academy. Continuing his role as a dynamic openside flanker for both club and country, Rhys went on to captain the Wales under 21 team during the World Cup tournament of 2006.

Placed on a contract with the Wales Sevens squad, Shelly returned to Pontypridd in readiness for the 2012-2013 campaign.

Rhys has been one of our all-round great flank forwards, he could do it all – fantastic over the ball in the ruck, a hard-hitting tackler and with the ball a dynamic runner with a good turn of pace and side-step.

In terms of international honours Rhys has represented Wales Youth, Wales FIRA U19, Wales U21, and Wales Sevens – captaining them during the Dubai leg of the World Series in late 2012.

During his time with Pontypridd Rhys won many honours, below celebrating winning the Welsh Cup in 2006 after a dramatic 26-25 win over Neath at the Millennium Stadium. 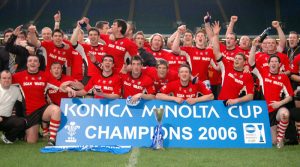 Speaking about his time with Ponty, Rhys said: “During my time with Ponty the highs have been all the games I’ve played. I’ve met some amazing people along the way from players to coaches and backroom staff. Winning so many trophies in our glory days a few years back and going on some great trips in the British and Irish Cup are all fond memories. The lows are the past 2 seasons where I’ve struggled with my fitness due to 2 torn pecs.

But I’ve loved my time at the club, I’ve been here since I was 18 years old – apart from 3 seasons –  and I’ve met some of my best friends here. I’m gutted I haven’t been selected to run out with the boys one more time but that’s rugby for you I guess. To the fans thank you for all your great support over the years,  you’ve been amazing.”

Speaking fondly about his former team-mate of many seasons, Team Manager Dan Godfrey said: “Rhys has had a fantastic rugby career which has taken him around the world. I have been very fortunate to play with him and against him over many years and have great respect for him. I believe every coach and player in the Premiership will sing his praises, and rightly so!

His standards and leadership skills on and off the pitch will be hugely missed around the squad.

I wish him all the very best in his next chapter. Don’t be a stranger at Sardis Rhys Ole Ole!”

Rhys signs off his illustrious career with Pontypridd having made 263 appearances for the club and scoring 53 tries in the process.

Everyone at Pontypridd RFC would like to thank Rhys for his contribution and commitment to the club over nearly two decades, and wish him and his family all the best for the future. 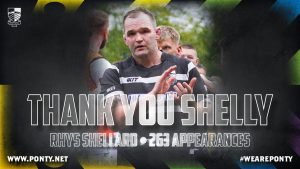