Squad update – Blacker on board with Ponty

The latest mid-term addition to the Pontypridd squad is scrum half Carl Blacker who joins up from his local club Cilfynydd. 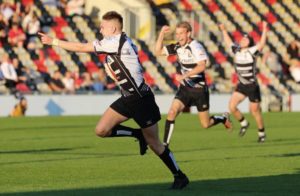 Having come up through the ranks of Pontypridd minis, juniors and youth, Blacker (pictured above) will be no stranger to Sardis Road, and steps into the senior squad as two other scrum halves, Dai Francis and Sam Middlemiss, depart due to work commitments.

Carl Blacker will provide a dynamic option in the scrum half position, having previously been involved with the Wales under 16 squad and having featured at regional level with the Blues North age grade squads.

Other players who have been released from an extended Pontypridd squad are full back Rhys Morgan, wing Ryan Davies, centre Ieuan Smith, back rowers Ross Morgan and Garrick Legge and lock Steff Jones.

Flanker Morgan Sieniawski has in the meantime once again been drafted into the Wales Sevens squad that will contest the World Tournament legs in Hamilton, New Zealand and Sydney, Australia over the next three weeks. The call-up comes after the young forward showed impressive form in his first two tournaments in Dubai and Cape Town towards the end of last year.