The Pontypridd & Valleys Rugby Initiative has proved to be a great success during its first few months, and can celebrate Christmas 2017 safe in the knowledge that a bright future lies in store for rugby development in the area. 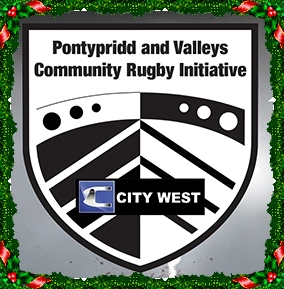 Over 1,800 local children have attended the Rugby Camps held at Sardis Road and Pontypridd Schools have enjoyed a successful start to their Dewar Shield campaign with four wins from their five matches played.

Ponty Schools enjoyed another productive day against their Cardiff counterparts with a draw and a win in two friendly fixtures at A and B level on Saturday 23d December.

Underpinning the Pontypridd & Valleys Rugby Initiative has been the sponsorship of City West Commercials whose contribution has been key and greatly valued.

Season’s greetings are extended to all who have contributed to the success of the Initiative – parents, children, volunteers, staff, sponsors and partners – Merry Christmas and looking forward to seeing everyone in the New Year.