Some of the best up and coming talent from the Valleys will be on show at Sardis Road on Saturday 14th October as the Blues Premiership Select XV take on Bristol Rugby in the opening round of the British & Irish Cup. 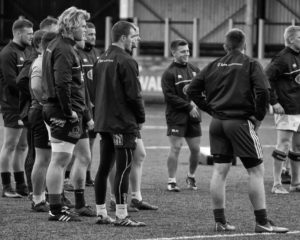 The squad is drawn from the three regional Premiership clubs, Pontypridd, Merthyr and Cardiff, including a number of players from the Blues Academy, and will be mentored by Ponty coach Justin Burnell, assisted by Llyr Lane (backs) and Matthew Rees (forwards).

According to the Select XV’s captain, Pontypridd flanker Morgan Sieniawski, the big match against Bristol is eagerly anticipated.

“We have a good bunch of players in the squad” said Sieniawski, “all of them passionate about their clubs and communities and mostly having come through the system together. Playing in the BIC will be another step up on the development pathway, against quality opposition.”

Ponty winger Dale Stuckey was another who made the cut and relished the prospect of facing a top English side.

“I’m looking forward to playing at Sardis on Saturday” said Stuckey. “As players we will be hoping for a good turnout of support, with so many Ponty boys having been selected. Playing in the BIC will be a different kind of challenge for us, in between our games for Ponty in the Premiership.”

The Premiership Select game at Sardis will aptly be played following a Valleys Rugby Initiative Festival at the same venue on the previous evening, as noted by Ponty Rugby Commercial Manager Emma Rogers.

“This weekend is a perfect example of the progress being made in nurturing young talent in the area” said Rogers. “That process will gain real momentum now with the Pontypridd and Valleys Ruby Initiative.

“There is a high inclusion of local talent in the Premiership squad for the BIC game on Saturday, which is a great achievement for all the boys involved, and a reflection of the hard work and commitment put in by players and coaches.”