Three teams have accumulated maximum points after the second weekend of the new Premiership season – Pontypridd, Newport and RGC edging ahead in the league rankings. 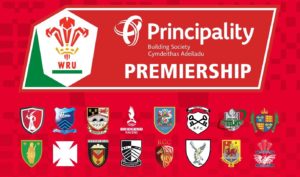 The action got underway on Friday evening as Ebbw Vale hosted Aberavon in a Scrum V televised tie. This was a game of two halves, the Steelmen trailing at the interval by 0pts to 17 but using their forward power to eventually win by 19pts to 17.

On Saturday Pontypridd recorded an emphatic home win over Llanelli by 43pts to 0 with seven tries to their name. RGC came away from Swansea with a 26pts to 34 victory, both teams scoring four tries apiece, whilst Llandovery maintained their fine early season form with a 20pts to 3 win over Cardiff, who have yet to score a try.

Reigning champions Merthyr were victors over Bedwas at Y Wern by 27pts to 7 with winger Lewis Williams crossing for a hat-trick of tries. Carmarthen Quins registered a first win of the campaign by 41pts to 28 at home to Cross Keys as Bridgend edged a tight 7pts to 10 win away to Neath.

On Sunday afternoon Newport kept in touch at the top with a 44pts to 30 win over Bargoed at Rodney Parade.