The Premiership campaign continues for Pontypridd with a home tie against RGC on Saturday 11th January, the match at Sardis Road kicking off at 2:30pm. 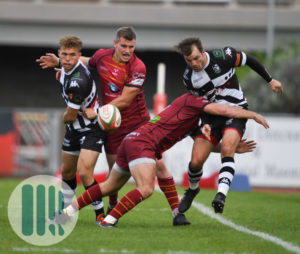 There will be much at stake in the bid to secure a top six finish in the league, with Ponty currently fifth placed in the table, three points ahead of RGC who have a game in hand.

In the reverse fixture back in October it was the North Walians who claimed a 26pts to 8 victory up in Colwyn Bay. The two opponents come into this match having suffered defeats in their previous outings, Ponty by 27pts to 20 away to Carmarthen and RGC by 29pts to 35 at home to Llandovery.

There is a turnover of props amongst the Ponty squad as Huw Owen is sidelined with an ankle injury picked up at Carmarthen, his starting place taken by Curtis Reynolds against his former club and with Ben Stephens returning from injury on the bench. Changes are also made in the second row with Sean Moore having recovered from illness and Chris Dicomidis making his first start of the season after a shoulder operation.

Amongst the backs Diggy Bird reclaims the no10 shirt after missing the Carmarthen defeat due to work commitments, with the versatile Corey Sheppard taking over at full back.Outside half Lloyd Wilkins from Pontyclun, who has been training with the Ponty squad all season, is given an opportunity on the bench.