Pontypridd host Cross Keys in a Premiership East tie on Saturday 30th September, the match at Sardis Road kicking off at 2:30pm. 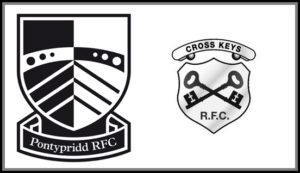 Both teams come into this game off the back of impressive victories in their previous outings. Ponty secured a bonus point win away at Bargoed by 10pts to 29 whilst the Keys became the first and so far only team this season to get the better of table toppers Bedwas – by 25pts to 22 at Pandy Park.

It was Ponty who took the honours in the only league clash between the two clubs last season, winning at Sardis Road on New Years’ Eve by 31pts to 22.

Pontypridd make a couple of changes to their line-up, with full back Geraint Walsh and no8 Hemi Barnes making their first competitive starts of the season. Aled Summerhill is drafted in on the wing from the Blues senior squad.