Pontypridd play their final pre-season friendly as they host Championship side Bargoed at Sardis Road on Saturday 11th September, the match kicking off at 2:30pm.

Bargoed are well into their competitive season, having already played three Championship Cup ties with an impressive 100% record following victories over pool rivals Cross Keys and Bedwas. As such they will provide a tough challenge for Pontypridd, who will again field a large number of players before an extended senior squad for the coming season is finalised. 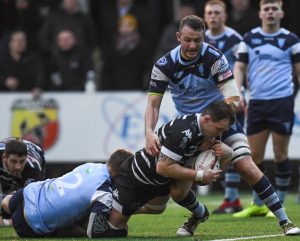 The two sides last met in another pre-season friendly back in August 2019 when Ponty registered a home win by 45pts to 20. The previous May, Bargoed had hosted Pontypridd in a Premiership match, a 28pts to 55 defeat confirming their relegation to the Championship.

Ponty icon and former captain Dafydd Lockyer will make a cameo appearance at the start of the Bargoed match, and will be the recipient of a presentation in the Sardis Road Clubhouse after the final whistle. He will surely be given a rousing send-off by the Ponty support after such a long and successful career with the club.

The Club Office will be open from 1pm to 2:15pm on Saturday to deal with season ticket applications.