Pontypridd Youth secured a safe passage through the first round of the National Youth Cup with an impressive 28pts to 7 home win over Tondu on Saturday 9th November. 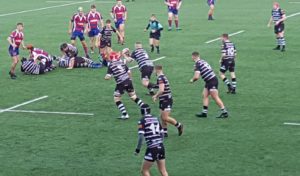 The Ponty youngsters had to hit the ground running in this must-win encounter as their previous three league fixtures had been called off due to bad weather. The victory came courtesy of tries scored by Will Huggins, Carwyn James, Aneurin James and Nial Jones, a penalty kicked by Kian Beech and a penalty and conversion by Nial Jones.

It will be back to league duties for Pontypridd Youth as they host Aberdare Youth in a crucial top of the table encounter on Saturday 16th November, the match at Sardis Road kicking off at 2:30pm.

Aberdare currently top the Blues Premiership, three points clear of second placed Pontypridd but having played two games more. Ponty remain the only team with a 100% record in the league so far with four wins from four games played.