Pontypridd continued their winning run in the Blues Premiership Tier 1 with a 12pts to 5 home victory over Cardiff Quins on Saturday 25th January. 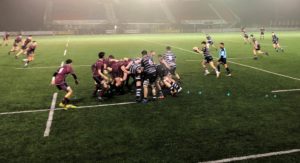 The result was earned due to tries scored by Matthew Iles and Kiean Richards, with winger Nial Jones adding a conversion.

Next up for the Youth will be a Blues Cup semi final tie away to league rivals Aberdare, the tie to be played on Saturday 1st February kicking off at 12pm.

The fixture schedule then sees Ponty Youth host Cardiff Met in the Blues Premiership on Saturday 8th February before travelling to face North Wales side Nant Conwy in the National Youth Cup the following weekend.