The Pontypridd squad will be wearing rainbow laces for the home Premiership tie against Newport on Saturday 29th February, in support of the campaign to ‘Make Sport Everyone’s Game’. 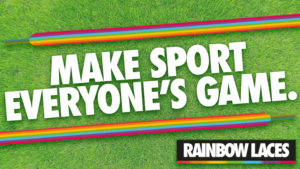 February has been designated as ‘LGBT History Month’ in the UK since 2005 with numerous events organised. The month is intended as a means of raising awareness and combating prejudice against the LGBT community, whilst celebrating its diversity and achievements.

The ‘Rainbow Laces’ campaign has helped foster positive attitudes towards LGBT people in sport by calling for an end to the discrimination they face.

Pontypridd RFC is proud to play its part in promoting the campaign.