Pontypridd play their final pre-season friendly on Saturday 24th August – a home tie against Bargoed RFC which kicks off at 2:30pm. 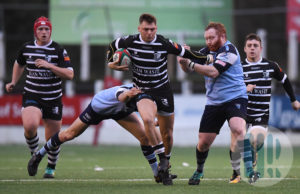 Over the past weekends Ponty have lost against Newport by 27pts to 33 and won against Clifton by 45pts to 12, both friendlies played at home.

The Bargoed encounter will provide a stern test for Pontypridd in preparation for the coming league campaign, the Rhymney Valley side having been relegated from the Premiership last season, but gearing up for an all-out assault for promotion back to the top flight, with the acquisition of experienced players such as Ronny Kynes and Steffan Jones.

The sun is due to shine on Sardis Road over the bank holiday weekend, supporters old and new are urged to turn up for the Pontypridd v Bargoed friendly to enjoy a great day of rugby and to socialise in the newly refurbished Ponty Clubhouse.

As a curtain raiser to the senior match, Pontypridd Schools under 15s will play against their Aberavon counterparts, kicking off at 11:45am.

Entry to the Bargoed game will be charged at £5 – access all areas – with under 16s allowed in free when accompanied by a paying adult. Season tickets will not apply for this fixture.