Four Blues players whose development careers were strongly linked to Pontypridd RFC have been included in the 36 man Wales senior squad in preparation for the 2021 Guinness Six Nations campaign.

Fly-half Jarrod Evans, prop Dillon Lewis and lock Cory Hill all came up through the ranks of Pontypridd Mini & Juniors whilst scrum half Tomos Williams is a Treorchy product who featured regularly for Ponty at Premiership and BIC levels. Williams returns to the squad having missed the Autumn Internationals with a shoulder injury. 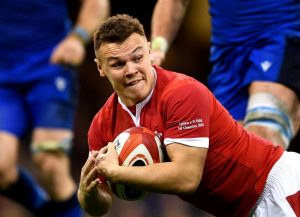 Upcoming pivot Jarrod Evans (pictured) has been in impressive form lately for Cardiff Blues and will seek to establish himself at senior international level, adding to his six cap haul.

Wales’ Six Nations campaign is due to kick off with a home tie against Ireland on 7th February.

“We are hugely looking forward to meeting up as a squad and to the forthcoming campaign. The Guinness Six Nations is an important tournament and we have selected a squad accordingly.

“As we consistently spoke about, the autumn for us was about opportunity and development, looking ahead to RWC 2023 and it served that purpose for us.

“This campaign is different, it is tournament rugby and we are excited to get going and to play our part.

“We have picked a squad for this tournament based on form and we are excited to get our preparation underway.”