Bargoed struck early, launching a line-out drive for hooker Rhys Buckley to burrow over with barely two minutes on the clock. A neat Lewis Williams break then gave Ponty momentum upfield, winger Ryan Davies up in support to cross for a try which Williams converted from a wide angle. Straight from the restart the visitors pounced on a loose ball, winger Duane Dyer going over in the corner. 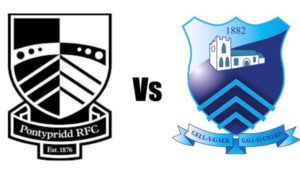 Following that frenetic start the game settled down with Ponty applying long periods of pressure but with no further points return, the end of the first quarter signalled by a warm weather water break.

It was nip and tuck as Bargoed claimed a high ball to launch an offensive but Ponty responding with a kick and rush counter. Both sides had so far spurned kicks at goal, preferring to aim for the corners, but right on half time Bargoed centre Steffan Jones elected to aim for the posts and claimed three points for his side, giving them an interval lead of 7pts to 13.

The game lost none of its momentum going into the second period, scrum half Joel Raikes taking a quick tap penalty to put Ponty on the front foot, and several phases later centre Corey Shephard crossing for a try which replacement Diggy Bird converted. Bargoed’s response was the favoured line-out drive, prop Jack Williams this time the beneficiary in claiming a try which Josh Prosser converted.

The action continued apace, a Ponty foray down the flank culminating in a try scored by lock James Murphy, Bird’s conversion rebounding off the post. The home team now looked to move up a gear, a wide attack allowing Shephard once more to cross with Bird this time on target with the follow-up kick. Working off a solid set-piece, Bargoed remained in contention but Ponty holding out in defence before ending the game in dominant fashion.

Corey Shephard pounced for his hat-trick try, again converted by Bird, before replacement Aaron Grabham rounded off a long range counter with a try wide out. Poaching line-out ball Ponty once more attacked from deep, dynamic flanker Morgan Sieniawski galloping over for a try which Bird converted. The home team maintained pressure, lock Kristian Parker charging over but no try awarded, Ponty having done enough to claim an emphatic victory by 45pts to 20 following an entertaining contest.