The hard work is continuing behind the scenes both on and off the pitch at Sardis Road. Whilst the players are being put through their paces on the pitch in training, work continues off it as the management and coaches shape the Pontypridd squad ready for the new season.

As a result, we can confirm that nine players that were attached to Ponty in various guises last season – Ben Burnell, Diggy Bird, Joe Popple, Cole Swannack, Lloyd Rowlands, Jac Davies, Jack Walker, Evan Lloyd and Tyler Morris have all moved on.

Ben Burnell linked up with Ponty prior to the 2021/22 season as a regional intern from the Cardiff Rugby regional age grade system. Some eye-catching form in pre-season earned Ben a place in the team’s starting XV when the season kicked off. Some fantastic individual performances earned him both plaudits and WRU Man of the Match awards before a serious shoulder injury away at Merthyr last November put pay to his involvement for the rest of the campaign. Ben scored 66 points in his 8 appearances for the club.

Former fan favourite Diggy Bird answered an SOS call from the club during a mid-season outside half crisis. He won Man of the Match thanks to a virtuoso kicking display as the team beat Carmarthen Quins 31-24 at Sardis Road just before Christmas 2021 – Diggy kicked 23 of our points. He finishes his second spell at the club having made 48 appearances and scoring 398 points in total.

Another former Ponty player who signed on permit for the club last season was popular prop forward Joe Popple – Joe made 2 more appearances to add to the half century prior to last season. He leaves the club having made 52 appearances and scoring 3 tries.

Outside back and Wales 7’s International Cole Swannack signed for Pontypridd at the end of January this year and made an immediate impact with the club – arguably his most memorable moment being his late, late winning try in our home Valleys Derby win over Merthyr at the beginning of March. Cole scored 3 tries in his 6 appearances for the club.

Lloyd Rowlands made his Pontypridd debut in August 2017 and made a real impact as a powerful attacking fullback and enjoyed an excellent first season with the club. However his time at Ponty has been hampered by injuries and he had to take time out from the sport for a period. He returned to make 5 appearances for the side last season, scoring 2 tries which took his club total to 14 tries in 44 appearances.

Young winger Jac Davies signed on permit for Ponty from his local club Pentyrch in early March. He made a great impression and bagged himself 2 tries in 8 matches for the Valley Commandos. Hooker Jack Walker (5 appearances), backrower Evan Lloyd (2 appearances) and outside half Tyler Morris (1 appearance) also depart.

Pontypridd RFC would like to place on record its thanks to Ben, Diggy, Joe, Cole, Lloyd, Jac, Jack, Evan and Tyler for their efforts during their time with the club and wish them all the best for the future. 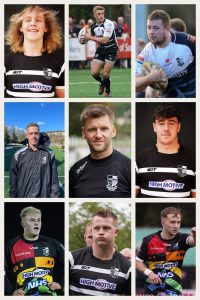