Pontypridd travel to face Newport in the Indigo Premiership on Sunday 17th November, the match at Rodney Parade kicking off at 2:30pm. 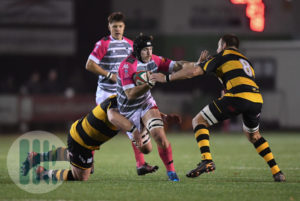 The Black and Ambers have hit a run of form, winning their last two games, away to Llandovery then at home to Bridgend, taking them into fourth position in the table, one point and two places above Ponty, who suffered a narrow defeat at home to Aberavon in their previous encounter.

In the corresponding fixture last season Ponty came away from the Parade with a convincing 7pts to 46 victory, ensuring that they completed the double over their Gwent opponents.

Recent injury absentees for Ponty who have not recovered for the Newport game are outside half Ben Jones with a calf strain, prop Huw Owen, being assessed for concussion, and lock Matt Davies with a recurring back spasm. Props Curtis Reynolds and Ross Davies have however got over the worst of knee and rib injuries respectively to take their place on the bench.

Recent recruit Morgan Richards will make his first start at full back, whilst former Ponty Youth player Rhodri Smith, who can cover at outside half and full back, is amongst the replacements.