Pontypridd play their penultimate league tie of the season away to Newport on Tuesday 8th May, the match at Rodney Parade kicking off at 7:15pm. 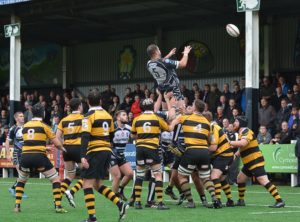 Honours were shared in the two previous encounters between the clubs in the east conference, with the results going with home advantage but closely fought on both occasions. Newport won by 29pts to 27 back in September, with Pontypridd avenging that defeat with a 47pts to 45 win at Sardis Road in mid November.

Ponty come into this latest clash on the back of an impressive six match winning run which has taken them to second place in the Premiership table and with an outside chance of overtaking leaders Merthyr.

On the previous weekend Ponty posted a 18pts to 8 home win over Cardiff whilst Newport lost to Cross Keys by 19pts to 35.

Into the final week of the season the Ponty squad has picked up a couple of late injuries, lock Sean Moore (groin) and outside half Ceri Sweeney (hamstring) both sidelined.

Promising scrum half Dai Francis from Beddau is given a first start for Ponty, partnering the returning Diggy Bird at half back. Hemi Barnes moves into the second row with Ross Morgan given an opportunity at flanker.