Pontypridd round off a tough itinerary of three consecutive away league games with a trip to Newport on Saturday 24th February, the match at Rodney Parade kicking off at 11:30am. 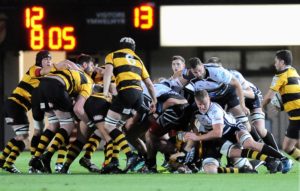 The aim for Ponty will be to overturn recent fortune, which has seen defeats at Ebbw Vale and Merthyr and a fall from second to fifth position in the Premiership table. Ironically Newport are one of the clubs who have leapfrogged Pontypridd, having put together a run of three straight wins in the integrated league, the most recent by 29pts to 20 at home to Llanelli.

Rodney Parade has not been the happiest of hunting grounds for Pontypridd in recent seasons. Earlier in the current campaign Ponty went down to defeat there by 29pts to 27 but gained revenge in another close encounter, by 47pts to 45 at Sardis Road in November.

The latest injury absentees in the Ponty squad are flanker Rhys Shellard and centre Geraint Walsh both with back strains. Declan Williams makes a return in the back line with scrum half Harry Rumens drafted in on permit from USW on the bench.

The Pontypridd team named to face Newport is as follows: