Ebbw Vale outside-half Evan Lloyd kicked off the final match of the 2021-22 season at Sardis Road. From the kick off Ponty no.8 Joe Miles was tackled in the air. Ponty kicked the resulting penalty into touch, won the line-out but got turned over in possession which allowed Ebbw a decent opportunity, they grubbered the ball through into Ponty territory for line-out but it didn’t come to anything and the home side were able to snuff out the danger.

12 minutes had elapsed when the home side had their first chance in the match, Ponty won a penalty from a powerful scrum on halfway and Jake Lloyd a defensive line-out to negotiate which they did successfully.

The Steelmen enjoyed the vast majority of territory and possession in the opening period of the match, in fact Ponty were yet to see any of the turf in the Ebbw half and in the 8th minute Evan Lloyd opened the scoring from the tee after Ponty were penalised put in a superb touch-finding kick into Ebbw’s 22. Ponty won the line-out on the right-hand side, spun the ball left along the line to Cole Swannack and his jinking run was halted and the ball ended up in touch but off an Ebbw hand. Ponty fumbled the ball at the line-out and it was an Ebbw scrum – little respite for the visitors as even though it was the early stages, the scrum was proving to be Ponty’s biggest weapon and another huge shunt resulted in an another penalty. Unfortunately Jake Lloyd sent his effort just wide and the score remained 3-0 to Ebbw Vale.

The next passage of play, around quarter of an hour was predominantly played in the Ebbw Vale half but Ponty had little to show for their endeavour. As previously mentioned, the Pontypridd scrum became the focal point of the match and Ebbw were forced into making a change on the half-hour mark when experienced Ebbw stalwart prop Rob Sevenoaks was sent to try and shore up the away side’s set-piece.

The match at this point was being dominated by set-pieces in the middle third of the pitch. Then in the 34th minute from an Ebbw Scrum their outside backs made a clean break through Ponty’s midfield, just as they looked to put the final pass in the ball was spilled, Dale Stuckey gathered, hacked through and looked to be body-checked but play was waved on.

There were a few frantic minutes to negotiate from Ponty’s point of view just before half-time to keep the score at 3-0. After 37 minutes the first real chance of the match occurred when Ebbw second-row Ethan Doyle was held up over Ponty’s try line after some good build up play from the visitors. This happened whilst the referee was playing a penalty advantage, Ebbw kicked that penalty into the corner but Ponty won the resulting line-out on their own line – the trend of both teams seemingly winning each others’ ball at the line-out continued when Ponty again stole another inside their own 22 in first half injury time after Ebbw’s well-judged 50-22 kick had earned them possession.

Ceri Morris got the second half underway for Ponty and it’s fair to say that this would end up being the half of the Ponty scrum.

46 minutes had been played when Ponty were awarded another penalty at scrum-time and the home side kicked to touch. The home side secured possession and a few phases later right winger Jac Davies made a superb break, he cut inside and offloaded the ball but it agonisingly missed everyone with the try-line in sight, Ebbw pounced on the loose ball and cleared their lines.

50 minutes were on the clock and at this point Ponty were really trying to inject tempo into the match but this proved difficult amongst quite a few Ebbw injuries which kept halting play. Ponty manufactured some quick ball and Jake Lloyd threaded it through the onrushing Ebbw defence and it trickled out right into the far right corner just before the try-line at the Clubhouse End of the ground. Ebbw threw in and after a phase on the ground the ball hit the referee, Ebbw were awarded the scrum and Ponty sniffed an opportunity. A huge drive at the set-piece, another Ponty penalty and this time it was also a yellow card for Ebbw due to repeated scrum infringements.

A few minutes later Ponty’s dominance in the scrum paid off when referee Mr. Dewi Phillips awarded the home side a penalty try, Ebbw scrum-half and skipper Jonathan Evans was also binned. Ponty were 7-3 ahead and the Steelman were down to 13 men.

From the restart, Ponty gathered the ball but a couple of phases later Ebbw got their hands on it in the ruck and they worked their way towards the black and white’s line, a superb turnover from workhorse Cally James and all of a sudden Ponty clocked the overlap down the left. The sheer distance from the try-line didn’t stop the home side and Ceri Morris chipped the ball across to Morgan Richards who gathered and had the whole pitch ahead of him – he sprinted along the left-hand touchline before kicking ahead but it was a covering Ebbw Vale defender that got there first to gather and dot the ball down behind the try-line for a drop out.

In the 58th minute Ceri Morris was yellow carded, in making a tackle his left arm came around the attacking player and knocked the ball forward – the referee decided it was deliberate foul play.

66 minutes had now been played and both teams were right into the ‘business-end’ of the match. Déjà vu – Pontypridd awarded another penalty at a scrum which allowed good field position from the resulting kick to touch. Ponty go through a couple of phases and despite the referee telling Ebbw to release the ball carrier at the ruck, they didn’t and the result was a penalty to Ponty and Ebbw Vale’s third sin-binning of the afternoon.

Five minutes later during a Ponty attack Ebbw are penalised for offside in midfield, smelling blood and knowing the upper hand that they had in the scrum Ponty turned down an easy 3 points in favour of the powerplay –  a decision that paid off when Mr. Phillips awarded Ponty their second penalty try of the match and in the process showed a fourth yellow card to the away side for infringing – 71 minutes gone and Ponty were ahead 14-3 with a two-score cushion.

There was still another chance for Ebbw to get back into the game late on from the restart after the try – Ponty gathered but a stubborn Ebbw turned it over on Ponty’s 22 metre line, quick ball and fly-half Evan Lloyd looked to be heading over for the visitors only to be denied when a superb last ditch Ponty tackle hauled him down just short of the home side’s try-line.

Pontypridd managed the game well in the last few minutes and saw it out to secure the win.

At the time of writing this report the men from Sardis Road were up to 4th position in the Welsh Premiership (albeit teams below them still having at least a match to play).

Despite having an 18 month hiatus due to the Covid-19 pandemic, just like that the season is done – as always thank you for your unwavering support during the campaign and we’ll see you later in the summer of 2022… 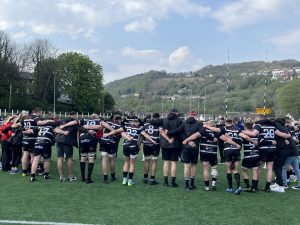