Pontypridd RFC are delighted to announce the signing of outside half Joseph Scrivens from Penallta RFC for the 2022/23 season.

The 27-year-old started playing for his local club Penallta before joining the Ospreys pathway as a teenager. Whilst with the Swansea-based region Joseph played for the ‘Ospreys Premiership Select XV’ as well as representing them in the Singha 7s. When he was down west Joe got his first experience of playing in the Welsh Premiership with Bridgend. A move to Cardiff RFC followed and when based in the capital he played for the Blues ‘A’ side whilst gaining more Welsh Premiership experience with the Blue and Blacks.

Joseph then played for the Wales 7’s side in the Romanian and French legs of the European Rugby Sevens Series.

Joe had gone full circle, signing back for his hometown club Penallta RFC before making the move to Sardis Road. On signing for Ponty he said: “I’m really happy to have signed for Ponty and to join the squad. It’s a massive club in Welsh rugby and an opportunity I’m really looking forward to.”

Ponty team manager Dan Godfrey commented: “We have been very lucky to sign Joe. He has a proven track record in the premiership as a 10 and a kicker and he’s still only 27. He’s had successful stints with Bridgend and Cardiff but work commitments stopped him playing in the premiership for the last few seasons. We are excited as coaching staff to see what Joe can bring to the side. I’m sure everyone with give him a warm welcome.” 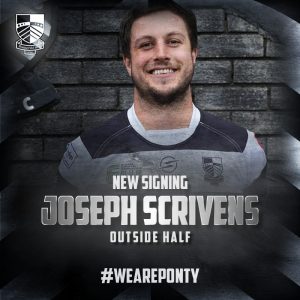