The Pontypridd squad emerged battered and bruised, in addition to being defeated in the away match at Aberavon last Saturday. 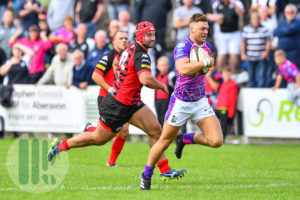 Amongst those withdrawn from the action were winger Alex Webber, scrum half Huw Rees and lock Chris Dicomidis.

Webber (pictured above) suffered a hamstring strain which will keep him sidelined for four to six weeks whilst scrum half Rees will undergo a compulsory nineteen day rest period according to the trauma protocol following a knock to the head . Chris Dicomidis suffered a recurrence of a previous knee strain and is now awaiting a scan to determine the nature of the injury.

Full back Lloyd Rowlands has completed his stand-down period following suspected concussion in the recent away match at Bedwas, but has not yet been given the all clear to resume playing.

Long term absentees for Ponty are outside half Diggy Bird and prop Jon Elley, both recovering from ankle and bicep operations, the latter having now resumed light training. There is better news on the more recent short term absentees, hooker Geraint Clarke (shoulder), lock Lloyd Evans (back) and flanker Rhys Shellard (thigh) all having benefitted from rest and hopeful of being back in the frame for selection.