Cilfynydd born Garyn Smith might have been destined to play for Pontypridd, following in the footsteps of father Steve and grandfather Joe, and coming up through the club’s junior ranks with brothers Dafydd and Rhodri. 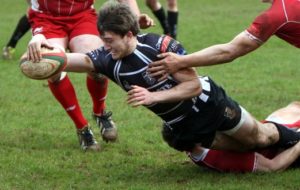 Drafted into the Blues age grade system and Academy, Garyn’s abilities as a midfield playmaker were rewarded with Welsh caps at youth and under 20 level.

It was from the Blues, where he soon developed into a key member of the senior squad, that Garyn was able to make his contribution as a permit player with Pontypridd, featuring at intervals but always capable of making an impact.