Rhondda product Macauley Cook graduated to the Blues Academy from his local club Treorchy, still as a Youth player.

Having won international honours at under 16 level, Macauley was selected as a member of the 2008 – 2009 Wales under 18s squad. 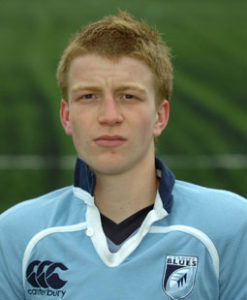 In the summer of 2009 Macauley was allocated to Pontypridd RFC as one of the club’s quota of Blues Academy players.