On Thursday night the UK Armed Forces team are playing Bristol Bears at Ashton Gate in a Remembrance Day Rugby Match, and one of our own – tight head prop Corporal Gareth Smith – will playing.

As many of you will know, Chester born Gareth is a serving soldier, based in Cardiff with the Royal Welsh Regiment. The UK Armed Forces team is made up of players from all our armed services, and the ladies and gentlemen who serve our country so well deserve all out thanks and support. The photograph shows Gareth getting his first cap with them last season, presented by Admiral Paddy McAlpine, Chairman of UKAF Rugby.

Gareth has made a tremendous impact this season for Pontypridd, and we are sure that he will do the same at Bristol on Thursday. If anyone is interested in going along then the kick off is at 7:45 pm.

Everybody here at Sardis Road wishes Gareth well in his rugby and in his army career. 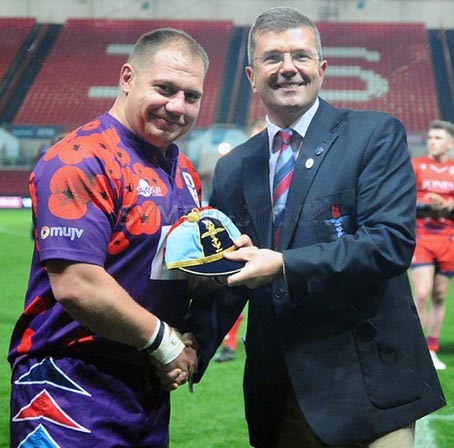