Pontypridd wing Dale Stuckey has won his second Principality Premiership Player of the Month of 2017. 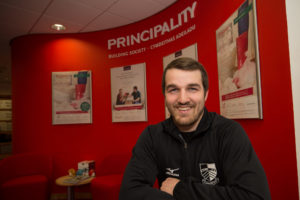 Dale Stuckey, who also picked up the award for February, helped the Sardis Road side move towards the top of the table with wins over Cardiff and Bedwas in October – and scored two tries in the 25-12 win over Ebbw Vale at the start of November. He also earned a place in the Cardiff Blues Premiership Select XV against Bristol and Leinster during the month.

He said, “Everything seemed to come together for us in the game against Bedwas. Things were working well for us in training before that with changes Justin (Burnell) had brought in, but that game was really the turning point.

“Playing in the British & Irish Cup was a great step-up for me. It was tough to try and gel with the rest of the team after a limited number of training sessions, but it was a learning experience coming up against full-time professionals to gauge where we are and we were pleased with how we fared against Leinster in particular.”

Stuckey was injured in his two-try romp against Ebbw Vale at the start of last month but has been buoyed by the support he’s received from the club and is targeting a big Christmas derby for his return.

“I’ve always had great support from the coaches especially Gareth Wyatt as a former wing himself, and he’s helped me a lot during my rehab, keeping me active and motivated.

“I’m back running now and it would be great to be back for the Cardiff game on December 23. We always get a good crowd against Cardiff, they’ve had some good wins this season and the game will be televised too.

“We just want to keep up the form and momentum we’ve built up recently and keep it going in the League and Cup. From a personal perspective, I just want to keep playing well for Ponty, hopefully get another chance in the British & Irish Cup and if anything else comes my way, I’ll jump at the chance to play at a higher level.”