Blacker steps up with the Dragons

Blues Academy scrum half Dane Blacker, who has been a regular inclusion in the Pontypridd RFC team selection over the past year, has been given an opportunity to step up to senior regional level with the Dragons. 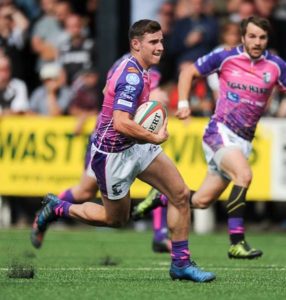 Blacker this week joined the Dragons on a short-term loan deal, and made a try scoring debut off the bench in the away defeat against Ulster on Friday 22nd September. He had previously started all four of Pontypridd’s Premiership matches this season.

The dynamic young scrum half, a Wales under 20 cap, had come up through the ranks of Pontypridd juniors and continues to represent the club at senior level as one of the Blues Academy allocation.

“This was a good opportunity to give a young player first team exposure in the PRO14. The experience will undoubtedly benefit Dane in his development and that will in turn benefit Cardiff Blues.”