At 14:30 this coming Saturday 15th September Pontypridd will look to make it three wins from as many games as the Valley Commando’s take on a wounded Aberavon side at the Talbot Athletic Ground. 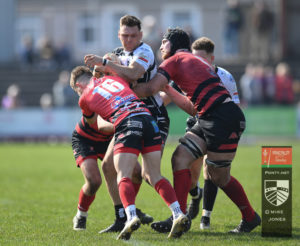 Aberavon have had a mixed bag of results to open their 2018/19 campaign as they kicked off the season with an opening day win against Swansea.

Last Friday though, having been 17pts to the good at Ebbw Vale, the Wizards found themselves on the end of a Steelmen backlash as they lost the match 19-17 in Scrum V’s first televised match of the season.

Having made a comeback of their own against Bedwas on the opening day, Pontypridd made no mistakes in dispatching a stuttering Llanelli side 43-0 at Sardis Road last Saturday.

When Pontypridd visited the Talbot Athletic ground in their solitary fixture with Aberavon last season, it was the away side who prevailed 15-19 with Gary Williams adding to an Alex Webber brace.

The Pontypridd team selected to face Aberavon is as follows: