On Saturday 3rd December Pontypridd earned an excellent 24-5 win at the Talbot Athletic Ground against Aberavon, the result sealing a place in the semi-finals of the Welsh Cup.

It was a real team effort from the Valley Commandos, but there were two personal club milestones for star winger Dale Stuckey – his brace of touchdowns, try number 88 and number 89 for Pontypridd RFC saw him surpass 500 club points and also moved him into the top 20 points scorers in our history since 1876.

Dale’s club tally of 503 points which is made up of 89 tries, 16 conversions and 6 penalties sees him leapfrog John Pritchard (501 points) into 20th place in the record books. His 89 tries also moves him to joint-8th with Steele Lewis on the all-time try scoring table for Pontypridd RFC. 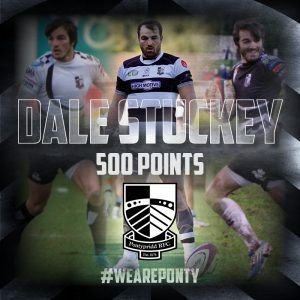