The Six Nations Rugby Championship is once again upon us, perhaps with a little less pomp and circumstance than in past years, with games played in empty stadiums due to the virus. The competition has its roots in the Home Nations Championship which started in the 1882-83 rugby season. The first match was played at Swansea on 16 December 1882, with Wales playing England, and Pontypridd RFC was represented in that game by Edward Llewellyn Treharne, who was making his second appearance for his country.

His first appearance for Wales had occurred under strange circumstances. A match had been arranged between England and Wales, to be played at Mr Richardson’s Field in Blackheath on 19 February 1881, despite the fact that some of the strongest club sides in Wales were due to play a cup semi-final on the same day. Therefore, the Welsh side that eventually assembled at Blackheath had been cobbled together in a somewhat haphazard manner – and was short of two players.

There were a few Welshmen amongst the small crowd of spectators, and the call went out for anybody who could play rugby! Edward, who normally played in the backs for Pontypridd, offered his services, and was enlisted to play amongst the forwards. It mattered little in those days, as the dark arts of scrummaging had not been developed. So the Pontypridd club got its first Welsh international. He is shown in the team photograph below, in the back row, second from the right, one of two players not wearing a proper Welsh jersey. 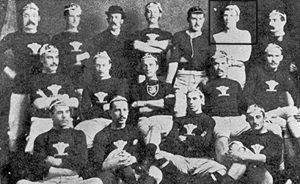 One of the absent players was another Pontypridd man, John Edward Brooks. Apparently, somebody had come up to him after he had played a game for Ponty against Shewbrook’s School at Sophia Gardens just after Christmas and told him that he had been selected to play for Wales. He heard nothing more of it and thought nothing more of it but was told later that he had been expected to turn up in London. So, he had missed his only chance of gaining a Welsh cap and of adding to Ponty’s early and small group of international players.

England easily won that first game, scoring 6 tries, 7 goals, and 1 dropped goal, to no score from Wales. The following season, in the game at Swansea, a better prepared Welsh team lost more narrowly to England by two goals and four tries to nil, but the selectors dropped two of the players for the next game – James Clare of Cardiff and Edward Treharne. His international career was over, but when Wales played Ireland a few weeks later, on 28 January 1882, another Pontypridd player, Thomas Williams, became our second international.

The club produced its third international in 1895. Ernest Edward George, standing at about six foot two inches and over thirteen stones, was a very big man for the time and was known as “The Gentle Giant”. He played at forward in three matches against Ireland and Scotland in 1895 and against England in 1896. The Pontypridd club then had to wait ten years for its next international when Duncan McGregor was capped by Scotland. Duncan was the Ponty captain at the time and was selected to play in all of Scotland’s international games in 1907, when they won the triple crown.

Another Pontypridd captain, Frank Hawkins, was capped in 1912 against Ireland and France. Frank was born in Wiveliscombe in Somerset and played for Somerset against South Africa in October 1906. He was a police officer in the Glamorgan Constabulary but left the police to become a pub landlord in Pontypridd and Porth before the First World War. During the war he won the Military Cross while serving in the Welch Regiment and returned to keep the Tynewydd Hotel in Porth. Frank was one of the first people in the Rhondda to own a car but gave it up after a few accidents because he said that it was interfering with his drinking! He also kept several pubs in Pontypridd, including the Maltsters, and died at Treforest in 1960.

Frank was the last Pontypridd player to be capped by Wales until Glyn Davies and Wynford Davies became internationals over thirty years later in 1946. We will continue the story of the Pontypridd internationals in a future piece and hope that some of our former players will add to the story as this year’s the Six Nations tournament continues.