As the snow continues to fall on Pontypridd, compounding the problems caused on the coldest St Davis’s Day on record, the situation concerning the use of the Sardis Road stadium is being constantly reviewed. 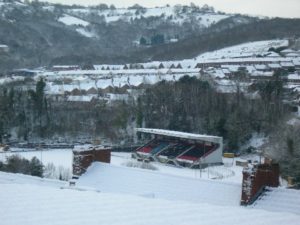 Pitch inspections took place on Friday morning 2nd March, and although the 3G pitch itself was technically playable, it remained under almost a foot of snow. There were also problems regarding the walkways around the pitch and road access to the stadium.

All games planned for Sunday 4th March – Wales u 18s v Welsh Charitables and the Blues Women under 18 and senior matches against the Scarlets, have been called off.

A final pitch inspection will be held at 9am on Saturday 3d March to determine whether the Pontypridd v Carmarthen Quins Premiership tie can go ahead, with hopes that a slight thaw forecast might make a difference.

Parents of children who attended the recent Kids Camp at Sardis, and who were invited to form a guard of honour at the Quins game, are advised that the invitation is put off to another date, even if the game goes ahead.