Seven up for Ponty in big home win over Llanelli 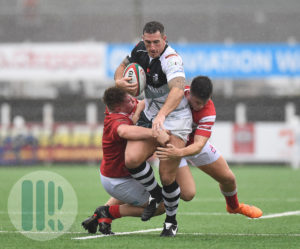 Although the contest lost some of its’ spark in the second period, with Ponty at times having to work hard in defence, their forward dominance and killer instinct saw them through to what was ultimately an emphatic victory.

Head Coach Justin Burnell was more than happy to take both the performance and the result at the final whistle.

“We are two games into the new season and we have ten points in the bag from two bonus point wins” said Burnell in his post-match appraisal.

“Results like this count for a lot in a relegation season and we worked hard today to make our opportunities count. It was a stop start game at times but running in seven tries without reply and securing another bonus point win can only be good for morale.”

“It was a forward dominated contest for long periods and our pack worked hard in the set pieces to lay the foundations for the win.

“Being four tries up at half time you might think the game was already won and we lost our way a bit in the second half. When the game opened up again late on we scored a couple more tries and overall we put up a decent show.

“I was happy of course to score another brace of tries – the contest for top scorer is already hotting up even this early in the season and I aim to retain my crown!”