Pontypridd host RGC in a Premiership tie on Saturday 7th April, the match at Sardis Road kicking off at 2:30pm. 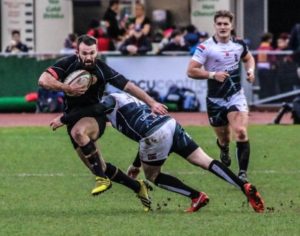 This will be the first clash of the current campaign between the two teams, and only the fourth ever. RGC recorded a clean sweep of results against Ponty the previous season, their first in the Premiership, with two league wins either side of a National Cup Final victory at the Principality Stadium.

The North Walians travel to Sardis Road buoyed by two impressive results over the Easter holidays. On Good Friday RGC won at home against Cross Keys by 55pts to 26 and followed that up in a live televised game on Monday with a 21pts to 64 away win at Cardiff. It was on Friday that Ponty recorded a 19pts to 54 away win at Swansea.

Those results have put RGC into third place in the Premiership table with Ponty trailing behind in sixth.

With Ceri Sweeney away on leave, Diggy Bird steps up at outside half for Ponty with Gary Williams resuming in the centre alongside Geraint Walsh. Alun Lawrence from the Blues Academy is given another opportunity to impress at no8. The latest injury absentee for Ponty is hooker Joe Page with a bruised heel, whilst winger Lewis Williams is tied up with work commitments.

The Pontypridd team selected to face RGC is as follows: