Pontypridd play their last home game of the season on Saturday 5th May with traditional rivals Cardiff as the visitors in a match that kicks off at 2:30pm. 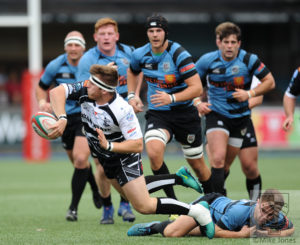 The May Bank Holiday derby clash is sure to attract a large crowd to Sardis Road, with Pontypridd pushing for as high a finish as possible in the Premiership. The Valley Commandos currently lie third in the table, four points behind leaders Merthyr who also have a game in hand. Ponty themselves have a crucial game in hand over second placed Carmarthen Quins, with just two points separating the clubs.

Seventh placed Cardiff have not played since 18th April when they posted a 45pts to 20 home win over Llanelli.

Ponty have a good record against their capital rivals in recent years, the Blue & Blacks’ last win at Sardis Road dating back to December 2009. In this season’s Premiership East conference Ponty achieved the double over Cardiff, winning by 28pts to 46 at the Arms Park in October then by 20pts to 18 at home in the traditional Christmas derby.

Outside halves Ceri Sweeney and Diggy Bird are both away on leave, with Jordan Rees given another opportunity to impress in the no10 shirt. Young scrum half Dai Francis is drafted in on permit from Beddau to take a place on the bench.

The Pontypridd team selected to face Cardiff is as follows: