Pontypridd host Bridgend in a Premiership tie on Saturday 10th March, the match at Sardis Road kicking off at 2:30pm. 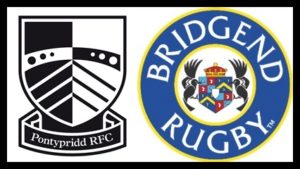 The two clubs have been kept well apart by the intricate fixture scheduling of the WRU, with the last game played between them way back in October 2016, resulting in a victory for Ponty at the Brewery Field by 13pts to 15.

In the current league standings, Pontypridd lie fifth in the table with the Ravens trailing behind in fifteenth position and yet to post a victory in the integrated Premiership. Without a game since 17th February, Ponty will be keen to resume action and undo the damage of two defeats, away to Ebbw Vale and Merthyr, in their previous outings.

With Dale Stuckey away on leave and Geraint Walsh suffering a back strain, changes to the Ponty back line see Lloyd Rowlands making a comeback from long term injury in the centre and promising young winger George Thomas from Coleg y Cymoedd drafted in. The success of the player pathway instigated by the Pontypridd & Valleys Initiative is further highlighted as scrum half Jamie Hill and flanker Sion Edwards from the University of South Wales are named on the bench.

The Pontypridd team selected to face Bridgend is as follows: