Pontypridd travel to face Newport in round six of the Indigo Premiership Cup Eastern pool on Saturday 23rd October, the match kicking off at 2:30pm.

In a pretty congested pool, Ponty sit in 3rd position behind Newport who are top, however, the Black & Ambers only defeat in the competition to date came against Ponty at Sardis Road in round one.

Ponty have made changes to the starting XV that triumphed over RGC last Saturday – Joe Davies earns a place on the wing after his try scoring cameo from the bench last week, whilst Brad Roderick and Joel Raikes also come back into the backline. Up front it’s a new look front row with Devine, Huish and Harper coming into the pack along with Sion Parry at openside flanker. 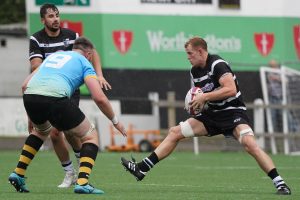 The Black and Ambers have recently moved their home games from Rodney Parade to the Newport Stadium which is situated to the south of the city. For those travelling by car with sat nav the nearest post code is NP19 4PT and parking is available at the ground.

There will be refreshments available in the nearby Newport cricket clubhouse which is open from 11am where food and drink will be available. Gates to the stadium open at 1pm and tickets will be priced at £12 adults, £8 concession and U16’s gaining free entry.

Games between the two tend to be close frenetic affairs so why not get yourself down to Newport on Saturday to cheer the team on, Ole!!