Michael Owen was always a deep thinker on the game, a man with an astute rugby brain.

It was ten years ago this month he announced his retirement from playing due to a persistent knee problem. He now works as Director of Rugby at Haileybury school in Hertford, a post he has held since 2013. 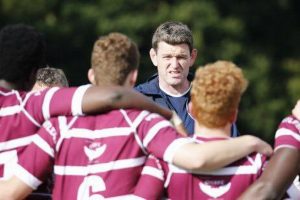 When I caught up with him for a chat, I found a man who still thinks long and hard about the game and has strong views on it – particularly Welsh rugby.

The former Pontypridd, Wales and Lions No 8 has real concerns over the sport in his homeland, with his view being that it’s built on sand. He feels there is a need for radical change and that the powers-that-be should use the opportunity presented by the coronavirus pandemic to really shakes things up.

In particular, he believes quality rather than quantity should be the focus at the top end of the game, with a “less is more” approach being adopted.

“When I was growing up as a kid, Wales were rubbish,” says the 39-year-old father-of-three.

“There was very little to be inspired about. Even when I started playing for Wales in 2002, we played in front of crowds of 15-20,000 for some matches because the national team wasn’t doing very well.

“But then, since 2005, we’ve had a golden era of Welsh rugby. Some of the best players in the world have been Welsh. But everything underneath the national team has got weaker. It looks like it is built on sand now.

“If Wales start failing, the crowds will go back down and you’ve got nothing, because you haven’t got that strength underneath of the community game.

“The kids coming through the Academies don’t want to play for their local clubs because they think it’s rubbish.”

Owen has real issues with the structure of the season in terms of the number of Guinness PRO14 matches that take place without the star names on duty.

“You have got 21 rounds of PRO14 matches during the season. How many of those are proper games?” he asks. About eight weekends maybe, plus the play-offs. It’s crap. That’s not a competition that’s going to sell. It’s really not. It’s pointless having PRO14 matches on international weekends. The competition is completely compromised when that happens.

“Why would you go and watch that? That’s not a professional level competition when you are taking out the best players. You can dress it up however you want, but that’s the truth. It’s rubbish. When you watch the PRO14, there’s no crowd, it looks empty, which makes the product look terrible. It’s a diminished product.

“If you can’t fill the stadiums, you are in trouble. They need to find a way to do that. For me, the answer is to have less games, but higher quality ones. They need to do something like that. They need to change.

“You should have ten or 12 international matches in a season and then a maximum of 18 games of regional rugby, with Europe and the league.

“Professional rugby is a brutal game. If you look at the number of matches that are being played now, it’s incredible. You can’t ask people to keep doing that. They can’t be at their best all the time.

“They need to cut the number of PRO14 games in half. I don’t think it’s viable for the league to be home and away. You can’t go and watch the majority of away games. It’s impossible. If you play less matches, then you would have all the internationals playing and it’s a proper elite-level competition.

“It’s got to be quality rugby. You would have less regional games, but they would all be top games. Every match would be jam-packed with internationals and you would get the crowds in. As it is, there’s no meaning to it. It’s pointless.”

Pontypridd-product Owen would also like to see the Welsh Premiership given greater prominence, with more pros involved at that level through a re-think of the make-up of regional squads.

“You could have a third of the squad region and international and then the rest region and club,” he said. Then when Wales play on a Saturday, you should get all those regional players who are not involved in the Welsh squad back playing for their clubs on the Friday or Sunday.

“That way you would get more people interested in the game and watching rugby in Wales, which is what you need. The Premiership could be a brilliant, vibrant competition. You need to have a Ponty-Cardiff game where there’s something on it.

“The Paul James testimonial at the Gnoll last year was a sell-out. How can that be? How can you sell that out, but you can’t sell a regional game out? There’s something wrong there.

“We need to get people watching rugby in Wales. To do that, they need to build the club game. You need people to be engaging with the sport every week. You want the whole game to be strong.

“The clubs below the Premiership should play in regional leagues where everything feeds into the region. So you would try and be the best team in the Blues, Scarlets, Dragons or Ospreys area and those clubs could then play off against each other to be club champions of Wales.

“That’s what happens in Ireland. Everything feeds in. You have got the Munster Rugby Union, the Leinster Rugby Union. It needs to be like that, rather than some abstract concept.

“In Wales, they have defunded the club game and made it less and less appealing for people. But the regions are only going to be strong if the clubs are strong. It shouldn’t be one against the other.”

The shutdown of rugby due to coronavirus provided an opportunity to look at the structure of the game world-wide.

But Owen – who skippered Wales to the 2005 Grand Slam – feels all we have heard is words so far.

“When lockdown began, people were saying we’ll do this and we’ll do that, it will be a new era,” said the former back rower. But to make those changes, you have to actually do it, and not just talk about it.

“Everyone is saying this is a moment to recalibrate. But it’s flipping rubbish, isn’t it? The English Premiership is all over the shop, World Rugby can’t come to a solution.

“With everything that’s happened, you have got an opportunity to sort it out and make it work the best for everyone. It’s a chance to grow the game and have more people playing it across the world.

“Don’t keep saying why you can’t and having self-interest. It’s been a bit rubbish and it’s been going on forever, holding the sport back.

“This should be a watershed moment, but it won’t be if you don’t have strong governance and people who are prepared to do it how it should be done. Now is the time to sort it out and get stuff done. It’s a golden opportunity.”

The 41-cap Owen has also been watching on with interest at the discussions that have been taking place in Wales over the finances of the game amid the pandemic.

“I think the players are really trying to be part of the solution with all the stuff around coronavirus, which is to their great credit,” he said. When I read about them saying they wanted a share of future profits, that’s the way it should be, in my opinion.

“When I started playing for Wales, the Union wasn’t making much money because the national team wasn’t doing very well and the players’ money should come down at times like that.

“But then if we go and win the Grand Slam, every match at the stadium is packed and they sell out the jerseys, I think the players should be rewarded for that.

“Wales have produced a lot of world class players over the last ten or 15 years and it has built and built. Those boys should be rewarded according to the success of the national team or their image rights. It should all be factored in. It shouldn’t just be some arbitrary number.

“It should be, ‘Right, we are making this money as a Union, we will put this into a pot for the players because they have had such a big impact on what we are able to do’. The shirt deal will be bigger when there is success on the field, sponsorship will be more. It should all be factored into it.” 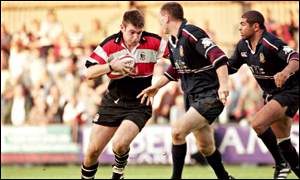 After a playing career which took in spells at Pontypridd (above), the Dragons and Saracens – as well as the 2005 Lions tour of New Zealand – Owen hung up his boots at the age of 29 in 2010.

He remains heavily involved in rugby today with his role at Haileybury and is very settled in Hertfordshire, where he lives with his wife and their three children – two daughters, aged 18 and 15, and an 11-year-old son.

“I love it at Haileybury. It’s great,” he said. “I head up the rugby programme and oversee a team of coaches who are all really passionate about the sport. It’s all about getting the pupils to enjoy their rugby and look at the best way they can develop and progress in the sport.

“We also run a High Performance programme, which I head up. That provides individually tailored programmes for pupils, looking at things like aptitude and athleticism. It’s a really important programme and I am passionate about it.

“I have always loved rugby. It’s in my family, I have played it from when I was six and it’s been a huge part of my life.”