High flying Grady keeping his feet on the ground

Following in the footsteps of an older brother who has represented his country could be an intimidating prospect for some players, but Mason Grady appears to be taking it in his – rather large – stride.

The Cardiff Blues academy utility back could be forgiven for feeling intimidated with the exploits of elder sibling Cory Allen, but the 18-year-old has already made headlines of his own in his fledgling career to suggest continuing the family legacy is a distinct 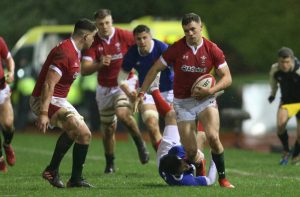 The Ysgol Gymraeg Bro Morganwg pupil made the rugby world sit up and take note last year with a stunning solo try for Wales U18s against South Africa Schools A in Paarl.

Picking up a bouncing ball on the halfway mark, the right wing ran sideways before exploiting a defensive gap. One hapless defender clutched thin air instead of the legs of Grady who then carved open the remnants of a desperate defence to score under the crossbar with a simply brilliant solo try which led to Wales securing a 31-31 draw.

“I was a bit surprised myself when I scored it to be honest,” he reflected at his family’s home during lockdown.

Social media channels went into meltdown after his stunning effort, hailing him as the next big thing – but Grady has an old head on young shoulders and didn’t get carried away with the euphoria.

“I try not to let the headlines get to my head too much – I don’t think you can,” he says, “I just try and forget about them and just concentrate on my game and not reminisce too much on that one try. I suppose I just want to just try and do it again.”

That philosophy led to the long striding Grady scoring twice against France in the final game of the last year’s U18 International Series, his second effort in the dying stages rescuing an unlikely 18-14 victory in Wellington.

Grady looks back on the tournament with nothing but fond memories.

“I remember just enjoying being around the boys 24/7 a day – the standard of rugby out there is just a different level. I didn’t really know what to expect playing in South Africa – the first game [against South Africa Schools] was a bit difficult, it was probably the toughest game we had after the Six Nations. After that game we eased into playing South Africa A which we drew then had a brilliant game against France which we won,” he recalls.

On his return, at 17 years, seven months he became the second youngest starter in Premiership history for Cardiff, eight years after his brother made his debut for the Blue & Blacks.

But his stint with Cardiff was short lived as he was then switched to Pontypridd.

“I started off with Cardiff in the Premiership and played one game on the wing and then my academy manager [Gruff Rees] sat down with me and said there was an option to go to Ponty. I’m glad I did really because I don’t think I would have got the game time I had with Ponty if I stayed at Cardiff.

Grady, momentarily, was caught by surprise when he was called up to the Wales U20 squad taking part in this year’s Six Nations which saw Gareth Williams’s squad gain wins against defending world champions France and arch enemy, England.

“The plan was I was going to play for Wales U18s because I still had a year at that age group but I got called up – I got the phone call to say I had been called up and I didn’t really know what to say,” he recalls.

“To beat France – the junior World Cup winners and England, was a great feeling. It was good how the boys went from two losses on the bounce against Italy and Ireland – they kept their heads on and then obviously we won those two games.”

Wales finished the campaign with just two wins from their five games, but Grady still came away with a positive mindset.

“I just wanted to help the boys out as much as I could in training and keep pushing them just to get that win,” he says. “I’ve got coaches like Gethin Jenkins who is the academy manager at the Blues so it’s good learning from him from the Blues and then into the Wales U20s level as well.

“I enjoyed the whole experience – I took off learnings from it, especially the older boys in their last year of U20s, it was a different level really compared to the U18s which I was playing only a few months before – I was very privileged to play at that level.”

Like his brother, Grady can play in more than one position, having played outside centre and on the wing and while the tag of ‘utility’ back can sometimes be a millstone around a player’s neck, the 18-year-old isn’t too bothered about such things at this stage of his career.

“I’ve always been an outside centre, I’ve only recently moved out to the wing around U18s level but I do play both.

“To be honest, as long as I’m playing, I’m happy – I enjoy the challenge from moving from outside centre to the wing as it’s a different perspective on the game – it also helps me understand when I’m playing 13 how the winger feels as well.”

And of course, there is always the sage advice his brother can offer at any time of the day.

“Cory’s been like an extra coach to me,” says an appreciative Grady, “He tells me how it is, he’s given me loads of advice about how to play the game, switching from positions because he’s similar to me as he’s gone from playing 12,13 and sometimes wing and back to 13.”

With a big future in front of him, Grady is however determined to keep his feet firmly on the ground.

“I’m still young, looking forward to enjoying my rugby. I try not to look too far ahead as it could all be over tomorrow so I’m just trying to enjoy my time playing rugby with my mates.”