Coleg y Cymoedd go head to head with Coleg Sir Gar in the WRU Schools & Colleges Premier Final on Tuesday evening 27th February. The match will be played on the 3G surface at Sardis Road, kicking off at 7:30pm. 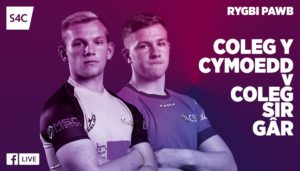 The two teams have dominated the competition since its inception, contesting five previous finals, with Coleg Sir Gar claiming the trophy in 2017.

A semi final victory by 27pts to 20 over Ysgol Glantaf then saw Coleg y Cymoedd through to the Premier Final.