Pontypridd play a Premiership East tie away to Cross Keys on Friday evening 1st December, the match at Pandy Park kicking off at 7:30pm. 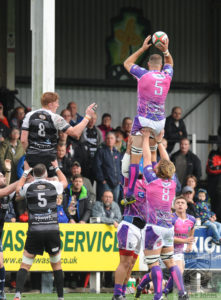 The aim for Ponty will be to maintain momentum at the top of the table, sharing pole position with Merthyr following a 26pts to 13 bonus point home win over Bargoed last time out.

An outing to Pandy Park on a cold winter’s eve will be no easy proposition for Pontypridd, against opponents who currently sit sixth in the Premiership rankings with a record of five wins from twelve games played. The Keys’ most recent result was a 32pts to 24 away defeat against Bedwas.

Back in late September Ponty secured a 26pts to 12 home win over Cross Keys in the first of three scheduled league encounters this season between two clubs who have also been drawn together in the first round of the National Cup.

Pontypridd make changes from the starting line-up against Bargoed, with winger Lewis Williams making a welcome return from injury. Prop Keelan Marney is given his first league start, with flanker Sean Moore and full back Joseph Williams also making the cut.